The feeding habits of Urotrygon microphthalmum, a Critically Endangered (CR) species, were investigated through stomach contents analysis from specimens caught on bottom double rigged otter trawls in Pernambuco state, Brazil, between March of 2010 and March of 2012. A total of 338 stomachs were analyzed, and 31 food items were identified in the diet of U. microphthalmum. The species ingests mainly shrimps. The diets between males and females were not different, and an ontogenetic diet shift was not observed. The estimated species’ trophic level is 3.5, classifying it as a secondary order consumer.

Conventionally, small-bodied elasmobranchs (< 150 cm total length) are classified as mesopredators and are often consumed by large sharks and other predators (Ferretti et al., 2010; Vaudo, Heithaus, 2011; Navia et al., 2017), although this trophic niche may change according to size class, habitat use, behaviour, and ontogeny (Heupel et al., 2014; Roff et al., 2016). Overall, mesopredators provide a crucial link between top predators and lower trophic levels in marine ecosystems and play an important role in ecosystem dynamics (Vaudo, Heithaus, 2011; Bornatowski et al., 2014a). The smalleye round ray Urotrygon microphthalmum Delsman, 1941 is a small batoid and occurs from Venezuela to Brazil. It is the only species of the family Urotrygonidae to inhabit Brazilian northeastern waters (Bigelow, Schroeder, 1953; Almeida et al., 2000; Santander-Neto, Lessa, 2013). According to McEachran, Carvalho (2002), individuals can grow up to a maximum of 300 mm total length. The species usually dwells in several environments such as estuaries, bays, inner platform shelves and islands, and is generally associated with muddy substrates (Piorski, Nunes, 2000).

Some basic aspects of the species’ biology have been studied in northern Brazil (Maranhão State) (Almeida et al., 2000; Piorski, Nunes, 2000; Costa, Almeida, 2003). Almeida et al. (2000) reported that all females bigger than 239 mm in total length were mature and that males were fully mature from 219 mm. However, Santander-Neto et al. (2016) estimated that size at maturity for males and females were 187 and 198 mm of total length, respectively. The authors reported that mysids and cumaceans were predominant in the diet, and the species was deemed as an opportunistic feeder (Almeida et al., 2000; Costa, Almeida, 2003).

Due to its small size, knowledge on much of U. microphthalmum biology is scarce and it has no commercial value as bycatch in trawl fisheries for prawn. Despite being globally categorized as Critically Endangered (CR) on the IUCN’s Red List (Pollom et al., 2020), the species was assessed in Brazil as Data Deficient (DD), meaning that there are not enough data on the species to assess its extinction risk (MMA, 2014; ICMBio, 2016). This study aims to analyze feeding habits and trophic ecology using stomach contents of U. microphthalmum caught off the shore of Pernambuco, in northeast Brazil.

The fishing gear used was twin bottom trawls. Each net was 10 m in length, 6 m at the mouth, and was formed by a 20 mm mesh in the body of the net and a 15 mm mesh in the bag. During operations, mean velocity of trawls was 3.7 km.h−1 (2 knots) which lasted 4 h in average. The fleet fishes daily in muddy and sandy bottoms but also with the presence of calcareous algae (Kempf, 1970; Manso et al., 2003).
Care and use laws for experimental animals welfare were not applied in this study due to the nature of data collection from commercial fishing landings. Some of the specimens used in this study were deposited under the voucher number LBP 0255 (Laboratório de Biologia e Genética de Peixes, Instituto de Biociências, Universidade Estadual Paulista “Júlio de Mesquita Filho”, Botucatu). For each specimen the total length (LT, mm), total weight (WT, g), stomach weight (WS, g) and maturity level according to Santander-Neto et al. (2016) were recorded. All stomachs were fixed with a 4% formaldehyde solution buffered with sodium tetraborate for at least 24 h and preserved in 70% ethanol.

A cumulative prey curve was constructed using the Shannon-Wiener method to evaluate whether the number of sampled stomachs was sufficient to describe the diversity of diet. The samples were randomized 50 times with the routine ‘sample-based rarefaction’ using EstimateS 7.5 software (Colwell et al., 2004). Sample size was considered sufficient if the curves visually reached an asymptote (Magurran, 2004). To assess the diet of U. microphthalmum, the following indexes were employed: Frequency of Occurrence (%FO), Percentage by weight and number (%W and %N, respectively) and Index of Relative Importance (IRI), where IRI = (%N + %W)*(%FO) (Pinkas et al., 1971; Zavala-Camin, 1996; Cortés, 1997; Lessa, Almeida, 1997, 1998; Fonteles-Filho, 2011).

Diet niche breadth was estimated by Levin’s index (Bi): Bi=(ΣP2j)−1 where Pj is the fraction by mass of each food item in the diet j (ΣPj =1) (Krebs, 1999). The values were standardized (BA) so that they ranged from 0 to 1 using the equation BA =(Bi−1) (N−1)−1, where N is the number of classes (Krebs, 1999). Low values indicated diets dominated by few preys items (specialist predators), whereas higher values indicated generalist diets. The feeding strategy of U. microphthalmum was analyzed using the graphical method proposed by Cortés (1997). Food items were grouped into categories following Ebert, Bizzarro (2007).

A Bray-Curtis similarity matrix was built using standardized estimates of prey weights to test if there is an ontogenetic shift of diet for U. microphthalmum (Bornatowski et al., 2014a). The reproductive parameters used here followed Santander-Neto et al. (2016). Then, the data were analyzed using nonmetric multidimensional scaling (nMDS) followed by a one-way similarity analysis (ANOSIM). This test is analogous to analysis of variance (ANOVA), and was used to verify similarities (distance) within defined groups (factors) against similarities between groups, and also calculates the statistic R, which varies between −1 and +1 (Clarke, Gorley, 2006). Analyses of percentage of similarity (SIMPER) were used to estimate the contribution of each prey category to ontogenetic differences in diets.

Trophic position. The trophic Level (TL) of U. microphthalmum was estimated by stomach contents following Ebert, Bizzarro (2007). For that purpose, the TL was assessed both for the species overall and also for juvenile and adult maturation stages separately. The softwares EstimateS version 7.5.1 and R (R Development Core Team, 2021) were used to show the food items curve and three-dimensional graphic, respectively.

Of the remaining stomachs (n = 258), most of them showed one or two food items (58.68% and 25.48%, respectively). However, stomachs containing three (10.03%), four (5.01%) and five items (0.77%) were also observed. Fullness index had a maximum and medium value of 1.69 and 0.16, respectively. Nevertheless, fullness index values between 0.0001 and 0.1 comprised 56.48% of all analyzed stomachs. A predominance of items in the last stage of digestion was observed (69.8%). Across all stomach samples, 31 food items were identified in the diet (Tab. 1). The cumulative prey curve slope was reached at around 160 stomachs (Fig. 3). Urotrygon microphthalmum had a diet consisting predominantly of decapod crustaceans (82.9% IRI) and followed by Mysidacea (5.6% IRI) (Tab. 1). Urotrygon microphthalmum species feed primarily on shrimps.

Similarity analysis between diets of juveniles (n = 52) and adults (n = 206) did not suggest an ontogenetic shift in the diet of U. microphthalmum (ANOSIM, R = 0.035, p = 0.147). Diets also did not differ between sexes (ANOSIM, R = 0.004, p = 0.151). The majority of smalleye round rays are decapod specialists and possess narrow niche widths (BA = 0.0144). Since the diet of males and females showed no statistical differences, all further analyses were conducted with the sexes grouped. The three-dimensional graphic showed a strong importance of unidentified decapods on the diet of U. microphthalmum. The species also demonstrated a low niche width and specialized foraging habits (Fig. 4).

Trophic position. The trophic level calculated according to Ebert, Bizzarro (2007) for U. microphthalmum assumed a value of 3.5 (secondary consumer) for both juveniles and adults.

The 31 prey items seen in stomachs of Urotrygon microphthalmum in this study is more than twice as high as what was reported by Costa, Almeida (2003) in northern Brazil (Maranhão). This may be due to many factors including difference in sample size, taxonomic categories and diversity of prey among the environments. Nevertheless, in the present study prey taxa number were closer to the 26 food items reported for the congeneric species Urotrygon rogersi (Jordan & Starks, 1895) in Colombia (Navia et al., 2011).

Seventy-nine stomachs were discarded from dietary analysis, which was higher in proportion than the reported for U. rogersi (Navia et al., 2011). By comparing our results to the diet of U. microphthalmum from a previous study, there were differences both in the composition of the diet and the importance of given prey items. Decapods (mainly shrimps) were a more important contribution to the diets in our study, whereas mysids and cumaceans were the most abundant categories in prior studies (Almeida et al., 2000; Costa, Almeida, 2003). Further comparisons between studies could not be done since only percent by number was estimated by the previous authors. These observed differences between diets of U. microphthalmum in these studies could be due to differences in the methodologies applied, the sample sizes or prey availability across locations. Although, our findings showed similar importance of preys as for U. rogersi in Colombia (Navia et al., 2011).

Dietary data in this study suggest that U. microphthalmum specializes on small crustaceans (including decapods and mysids) and small substrate-related fishes. When the most common food item of a predator’s diet is also a broad category with high abundance in the enviroment, the difference between generalized opportunism and feeding specialization can become quite difficult to infer (Yokota et al., 2013). With this issue in mind, Costa et al. (2015) suggested to also evaluate prey availability and diversity in the study area when making a decision between opportunism vs. specialization.

Most teleostean individuals could not be identified to lower taxonomic levels due advanced levels of digestion, with only vertebrae, amorphous mass, and/or scales remaining. Nevertheless, in less digested preys by observing the shape of the body (leaf-like) it appears that at least some of non-identified teleosteans were in the family Cynoglossidae (tonguefishes) (Carpenter, 2002). Several authors have demonstrated a relationship between sexual dimorphism in teeth and dietary differences across sexes in Batoid species (Kyne, Bennett, 2002; Morato et al., 2003; Scenna et al., 2006). In these cases adult males have needle-like teeth that help them bite the pectoral fins of females. Despite U. microphthalmum showing tooth sexual dimorphism (Rangel et al., 2016), no differences between male and female diets were found. This result also aligns with findings for U. rogersi in Colombia (Navia et al., 2011).

Although ontogenetic shifts in diet are almost universal for fishes (Zavala-Camin, 1996; Lessa, Almeida, 1997; Wetherbee, Cortés, 2004), such a shift was not observed for U. microphthalmum. This may be due to habitat use by the species. From dietary data, U. microphthalmum seems to inhabit the same muddy areas throughout its entire life cycle, following the pattern shown by Knip et al. (2010). However, Garrison, Link (2000) pointed out it is possible to have a change in trophic level within life stages even without an ontogenetic shift in diet, allowing a life stages within a given species to act like two species in an ecosystem due to differences in their trophic level. However the trophic level was equal between juveniles and adults of U. microphthalmum.

Trophic level assessed from stomach content analysis yielded a value of 3.5, which corroborates estimates by Jacobsen, Bennet (2013) for the family Urotrygonidae. Thus, U. microphthalmum can be classified as a secondary consumer within the marine food chain. This consumer plays a fundamental role in energy transfer between benthic and demersal environments (Begon et al., 2006). Urotrygon microphthalmum feeds on detritivorous species, that can lead to a high energetic balance and would explain its fast somatic growth and early maturity (Santander-Neto et al., 2016). 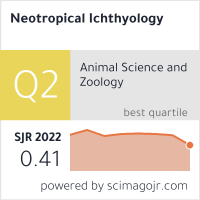